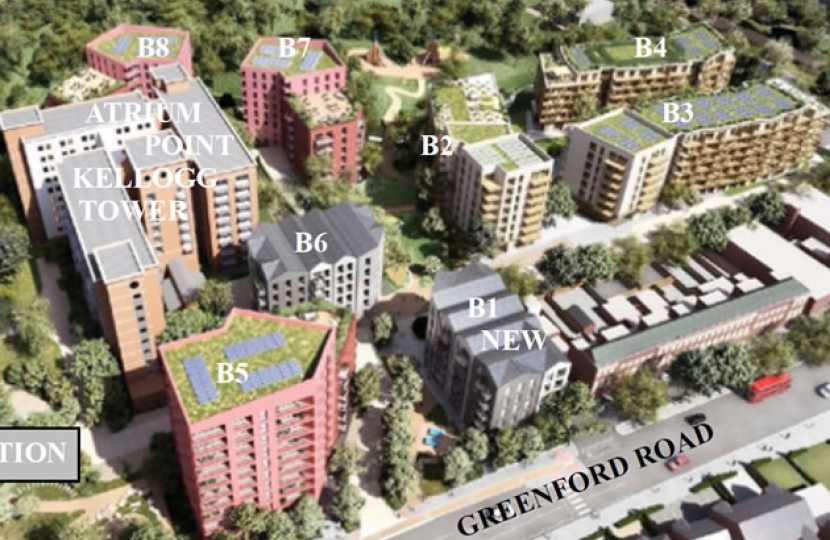 The Ealing Labour Council have already approved a scheme with corporate developers to build 346 flats at the Kellogg Tower site. This building has been renamed Atrium Point and converted into 263 luxury flats.

The new application would add a further 288 more units which would bring the overall total number of housing units at the site to 824 including Atrium Point.

There will be five new blocks proposed including one that will be as high as eleven storeys on Greenford Road.

The application is currently being opposed by local groups such as the North Greenford Residents’ Association (NGRA) which believes that this would represent a mass over-development of the site.

There are just over 50 parking spaces provided for the 561 new flats which the local group argues will cause even further congestion along the Greenford Road and increase issues for resident parking within the area.

This whole site is being planned on Metropolitan Open Land which the local residents group says should give the same protection as Green Belt. Organisations such as the National Planning Framework outline that Green Belt should only ever be considered for development in very exceptional circumstances and the North Greenford Residents Association argues that does not apply here.

One of the proposed high rise tower blocks would be built on grass land and two of the others would require the complete removal of several natural mature trees including a group of Cracked Willow and 3 large Cedars. The independent tree survey has concluded that out of 221 trees on the total site 166 would have to be felled in order to carry out this mass over development, that is being pushed through by the Ealing Labour Council.

To comment on this scheme go to the Ealing planning web site and put 213378FUL into the search box. The closing date for submissions is 23 June.

These are just some of the other biggest towers and skyscrapers planned for Ealing. Some have already been approved by the Ealing Labour council, some are still at the planning stage.

Premier Inn - Uxbridge Road - The Premier Inn is requesting permission to build a 15-storey tower in their car park in front of the current hotel.