Sara Kumar has been Deputy Chair Fundraising of the Ealing Central and Acton Association since February 2015. Born, raised and educated locally in the Ealing area, Sara works as an Events Manager at the think tank The Centre for Social Justice in Westminster. Sara was a candidate for the West Ham constituency in the 2019 General Election and a Council candidate in Acton in the 2018 local elections. Sara has been a local activist against crime, solving homelessness and an advocate for animal welfare in west London for nearly a decade and continues to raise awareness to these issues.
As the Vice Chairman of the local Safer Neighbourhood board, Sara actively works to build the bridge between the community’s needs and the Metropolitan Police. As part of this role, Sara also manages several community projects that aim to reduce and prevent crime in and around the Ealing area. 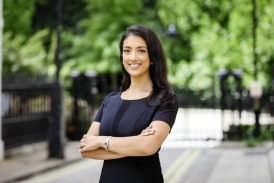