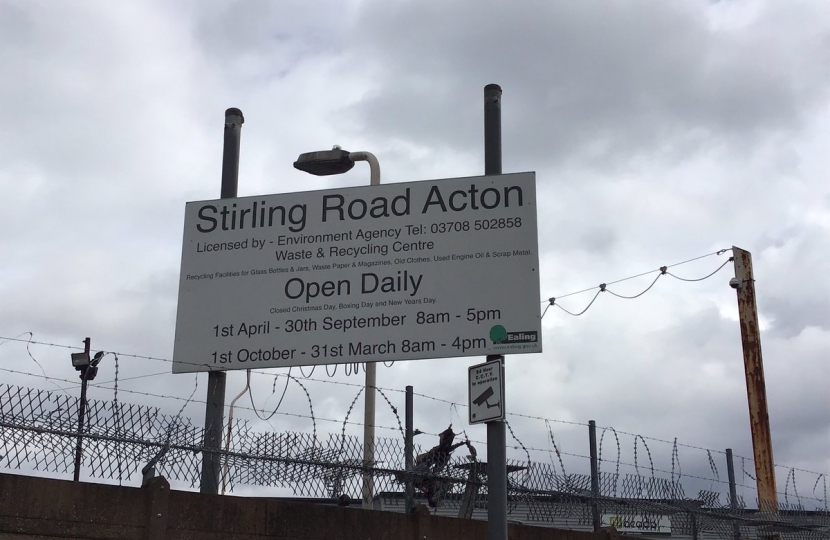 As well as the recent announcement of there being a budget black hole of £27.7 million and a council tax hike of 5%, the council have identified £7 million in cuts which they believe can be made. They believe this will be done for example through Future Ealing efficiencies and reviewing a variety contracts.

The council is in a self created financial mess and they have already agreed to a package of measures in an attempt to tackle the financial deficit.

A newest announcement from Ealing Labour has now included - the potential closure of Acton Reuse and Recycling Centre. Greenford Centre would then be the only public site, and it’s claimed that this would ''consolidate'' recycling operations and bring Ealing in line with other London boroughs. Residents who would usually visit the Acton dump would be forced to use the site across the border in Brent at Abbey Road in Park Royal. To make matters worse, If Sadiq Khan gets his way with the new ULEZ, residents will have to pay at least £12 to cross the north circular to go to the dump. Once again Ealing Labour are pushing ahead with a policy that will be devastating for the environment and is devoid of any form of proper consultation with residents.

Last month plans for the huge TfL Bollo Lane monster development were given the green light by Ealing Labour. This will see 10 tower blocks from Acton Town station to the 25 storey Bollo Brook House at the Chiswick end. Stirling Road is sitting just behind Bollo Lane. This land will inevitably become a fertile area for developers and speculators. Ealing Labour are committed to a policy of monster skyscrapers and high rise developments with no consideration for the heritage of Ealing and no consideration for building genuinely affordable family housing.

An Ealing Council spokesperson said, “Ealing Council is currently considering a number of budget proposals involving the boroughs waste services. One proposal includes consolidating waste and recycling operations to one main site at the larger Greenford Reuse and Recycling Centre, bringing Ealing in line with other London boroughs. We have ensured that residents in the area will be able to use the recycling centre at Twyford Abbey Road".

Please join us in our campaign to keep the site open. Follow the link below to sign the petition 👇🏽👇🏽👇🏽