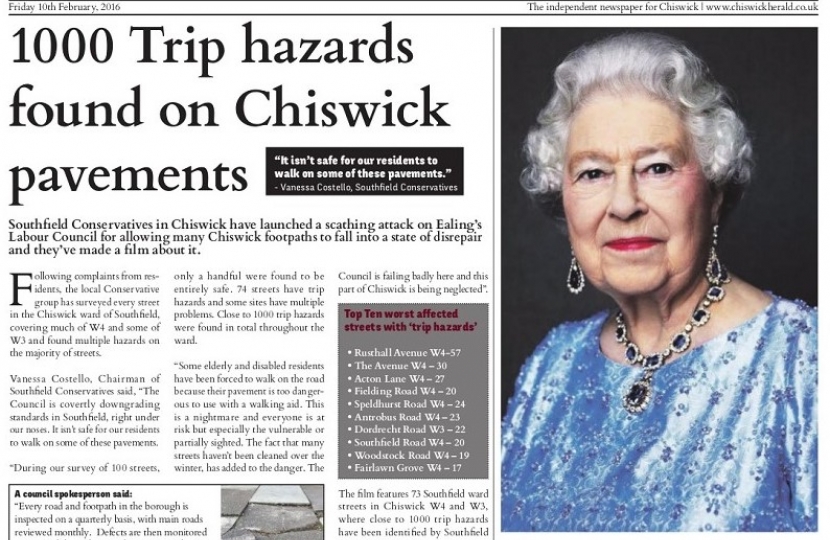 “It isn’t safe for our residents to walk on some of these pavements.”

Southfield Conservatives in Chiswick have launched a scathing attack on Ealing’s Labour Council for allowing many Chiswick footpaths to fall into a state of disrepair and they’ve made a film about it.

Following complaints from residents, the local Conservative group has surveyed every street in the Chiswick ward of Southfield, covering much of W4 and some of W3 and found multiple hazards on the majority of streets.

Vanessa Costello, Chairman of Southfield Conservatives said, “The Council is covertly downgrading standards in Southfield, right under our noses. It isn’t safe for our residents to walk on some of these pavements.

“During our survey of 100 streets, only a handful were found to be entirely safe. 74 streets have trip hazards and some sites have multiple problems. Close to 1000 trip hazards were found in total throughout the ward.

“Some elderly and disabled residents have been forced to walk on the road because their pavement is too dangerous to use with a walking aid. This is a nightmare and everyone is at risk but especially the vulnerable or partially sighted. The fact that many streets haven’t been cleaned over the winter, has added to the danger. The Council is failing badly here and this part of Chiswick is being neglected”.

The film features 73 Southfield ward streets in Chiswick W4 and W3, where close to 1000 trip hazards have been identified by Southfield Conservatives.

A council spokesperson said: “Every road and footpath in the borough is inspected on a quarterly basis, with main roads reviewed monthly. Defects are then monitored or repaired depending on the severity. The council invests more than £2million a year on maintenance and repairs. The footpaths in this part of the borough were last inspected less than 3months ago. Residents can always report concerns online and they will be inspected within 7 days.”